News from the six and a half year mark

I haven't wanted to deal with Lyme Disease for awhile.  Mostly because it's an identity I don't want but also because I have been steadily improving and spending time doing other things.

Hope is something that helped me through the very dark days.  I used to search for those people who got well and went back to their lives-- maybe not entirely but enough to make it worth living.

So at my six and a half year mark, I want other fellow lymies to know that my life is so much better.  I have a few days every other month or so when symptoms put me in bed but it usually is due to my own bad decisions about consuming sugar, white flour or caffeine.  Or if I don't sleep for a couple nights due to stress.

The science is getting better.  Since I began treatment, Dr. Eva Sapi and Dr. Alan MacDonald have discovered the presence of biofilm made by the Borrellia burgdorferi.  http://www.canlyme.com/Sapi_et_al_2011.pdf
This means that antibiotics alone may not get rid of all the forms of the organism.  By including enzymes which destroy biofilms in treatment protocols, outcomes may be better.

I believe my own healing took a dramatic leap forward when I began taking the supplement Nattokinase.  Actually, I took a supplement called Endovan for endometriosis which contains nattokinase.   I suffered from severe endometriosis and was about to undergo surgery when an online search revealed this enzyme that could dissolve fibrin.

After only a month taking 5 pills a day, my endometriosis pain was significantly less and now, a year into the supplement, I have no pelvic pain whatsoever and my lyme symptoms dramatically improved.  Could it be that the biofilms were broken down and my immune system better able to kill the infection?

Dealing with this illness has changed me.  The greatest change being my views about alternative medicine.  If not for my trail and error with many supplements, natural doctors and alternative modes of healing and detoxification, I would not be doing as well as I am.  I am a firm believer in the mind body connection and the fact that antibiotics are not a cure, food and lifestyle are the best medicine for this disease.

The 2010 Lyme Disease Symposium at UNH

I will be at the conference and the paintings in last blog will be on exhibit. Please come learn more about Lyme disease!
Posted by Kimberly Ruggiero at 12:13 PM 4 comments:

It is my belief that medicine is still an art and a science despite the desires of a health care system that demands clear cut answers and economical treatments. 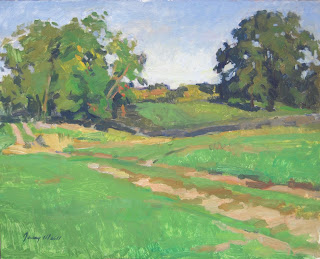 Some illnesses are black and white. The tests for them are accurate and the treatment protocol is clear cut.


Late stage Lyme disease is not. Tests are inaccurate and treatment that would have worked at the time of the tick bite are not effective once the infection becomes entrenched. 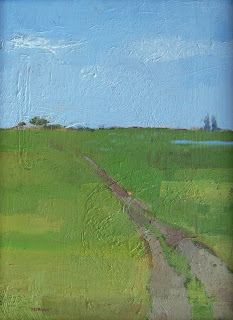 "Wet Paint for Lyme Disease Research" was an event held on July 12, 2009 in downtown Stony Creek, Branford. This fundraiser was organized to support the research of Dr. Eva Sapi at the University of New Haven.

She and her staff have identified a unique characteristic of Borrelia burgdorferi that may explain why it is so difficult to detect and treat. It is called a biofilm. This sticky substance is created by the spirochete to protect itself from the immune system as well as treatment. 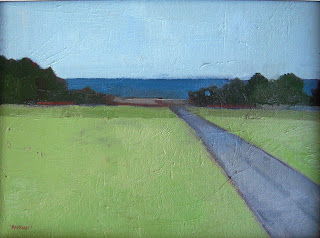 
The event brought over 25 professional artists together for one day to paint en plein air and sell their works in a silent auction later in the day. Before the auction, Dr. Sapi spoke about her research which drew over 100 people in attendance. 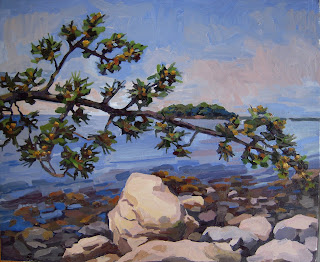 To keep the project alive, these 20 paintings from the day (and some donated) will travel to the university May 8, 2010 for an exhibition during the Lyme Conference to raise money and draw continued attention to Dr. Sapi's research findings. 50% sales will go to the artist and 50% to research. All paintings on this blog are in the exhibition and available. 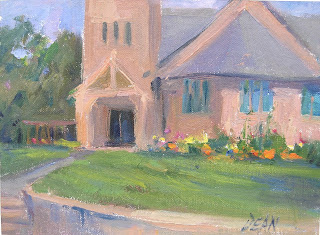 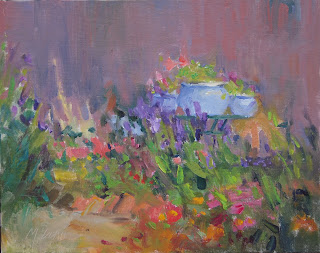 
About The University of New Haven Lyme Research Group 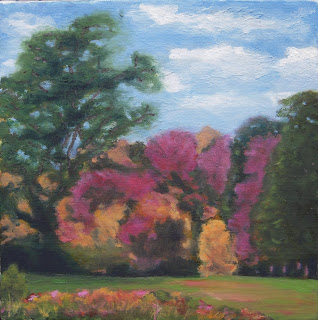 Furthermore, the University of New Haven has held three National Lyme Disease Symposiums during the last three years (2006-2008) with over 200 attendees. Both symposiums were generously supported by the University and by the College of Art and Sciences. 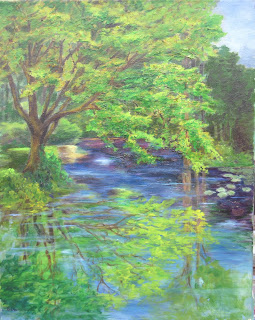 
In the Fall of 2007, the University of New Haven begun one of the largest tick counting and Borrelia testing surveys in the North East (testing over 50 sites in Fairfield County). The uniqueness of this survey is that the tick collection is being done at school yards, public parks and playgrounds, to evaluate exposure of our children to tick borne diseases. 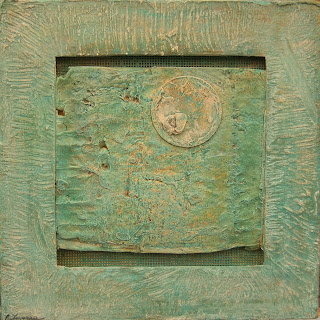 As of June 2009, the University of New Haven has collected ~1500 deer tick samples and tested ~900 samples for Borrelia burgdorferi (Bb) infection. The overall Bb infection rate was 72%, ranging from 51%-94%. 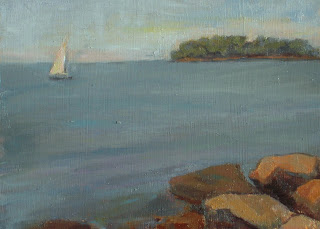 
The group also studies different forms of Borrelia bacteria to better understand how Borrelia can hide from the immune system and from different therapies. 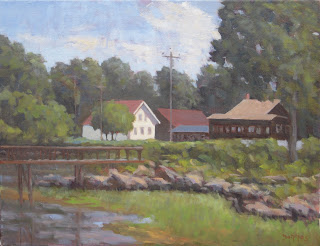 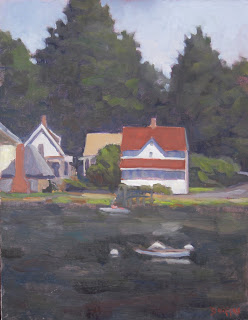 
With collaboration with Dr. Alan MacDonald, our group discovered that Borrelia is capable forming a protective layer around itself – called biofilm – which could render it to be resistant to antibiotics and provide a logical explanation as to why extensive antibiotic treatment for patients with a tick-bite history could fail. 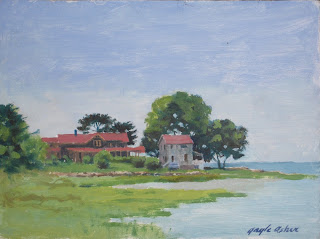 Hannah's House, 9 x 12, oil/panel, $175 Gayle Asher
The artwork that you see in this post will be exhibited at UNH this weekend May, 8 from 10-5 during the Lyme conference. If you want more information contact kim@ruggierogallery.com --- 50% proceeds go to research at UNH and 50% to the artist. 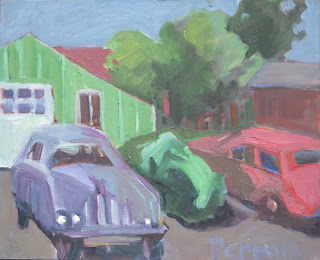 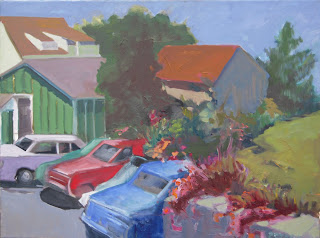 Brainerd's Garage, acrylic/canvas, 18 x 24, $350 Diana Perron
Thanks to these amazing professional artists for participating in this event. Your help and encouragement is a blessing.